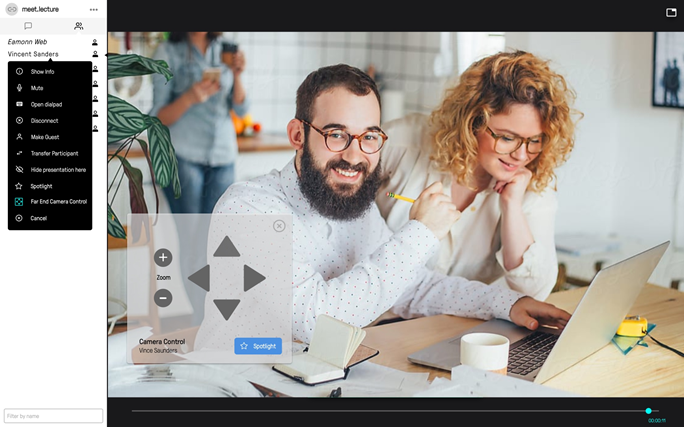 This article covers the new features and functionality in Pexip Infinity (self-hosted) version 22:

In some scenarios it's very useful to be able to adjust the camera of a remote conference participant. This is now possible with the Pexip WebRTC client and the Pexip Infinity Connect client.

Endpoints that support FECC can now be controlled by a Host participant using an Infinity Connect client.

In healthcare, a common use case would be a doctor talking to a patient and needing to ensure a better view of the patient. The feature is also useful to a conference concierge who may assist participants to be properly framed, improving the meeting experience for other participants.

This feature requires Far End Camera Control (FECC) support from the SIP or H.323 video conference endpoint and the FECC menu option will only appear for participants that have a camera that can technically be controlled.

Administrators managing their own Pexip Infinity deployment often praise the value of the Pexip Infinity Live View as it gives them a total overview of all calls in their global deployment. Some of our customers host so many conferences  that showing all of this data on one screen has become overwhelming. This is especially true in a situation where an administrator is looking to single out a few participants that might have a call quality issue from all other activity.

The new feature in Live View allows an administrator to:

Users on a desktop computer (often connecting with WebRTC via a browser or the Pexip Infinity Connect application) may have varying network conditions,  especially with ADSL users. The improved resilience in this release allows the Pexip client to better adapt the sent audio and video stream despite their limited upstream bandwidth. This improvement applies for clients supporting Google Congestion Control, such as the Google Chrome browser and the Pexip Infinity Connect client.

For customers with regulatory requirements that do not allow unencrypted calls, a new feature in this version allows an administrator to enforce encryption either platform wide or for each service configured. By default, Pexip will be set to "Best effort" where all calls will be encrypted if possible, but unencrypted callers will not be rejected.

In the past, there were some limitations when sharing content between video conference systems and meetings in Google Hangouts Meet. The new capabilities allow a presentation to show up properly in both directions as dual streams so you can see the people you are meeting with and the content at the same time.

The Pexip client now has a brand new feature which has frequently been requested by our education sector customers. It's also very useful for company all hands meetings. It's called the "Raise hand" feature which allows participants to indicate that they would like to speak. This allows a conference host to temporarily promote a participant to meeting host or unmute him or her in order to ask a question.

There are also a ton of other improvements on the clients such as:

It's now become even simpler for administrators deploying their own Microsoft Teams Connector with their Pexip deployment. Only one Application ID will be used where previously two were needed. There are also general quality enhancements in this release, including improved stability and higher video quality. In addition, work is ongoing to facilitate support for our customers in Azure Government - see this article on Helping Government Migrate to Microsoft Teams. 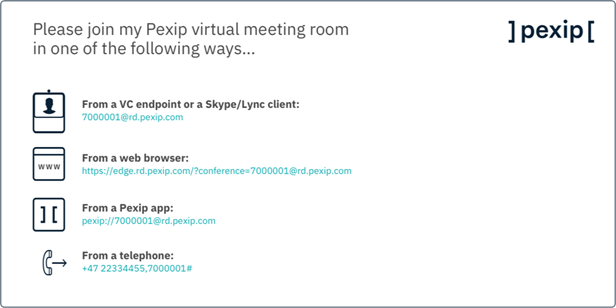 In addition to the features highlighted above, there are many smaller changes and improvements with our streaming feature. Pexip now gives users more control on when media starts flowing to a streaming service. There are also new indicators for Google Hangouts public streaming and updates to include our new Pexip logo and icons.

More from the blog
Product

Pexip to acquire Videonor’s base of enterprise customers